70% of people experience it at some point in their lives.

So What is Hypnic Jerk?

During the hypnagogic stage of sleep (the space between being awake and being asleep), it?s easy for your brain to be ?jerked? back into being awake by something like an involuntary muscle twitch or movement.

And that?s exactly what happens during a hypnic jerk; your muscles twitch and your brain says “WAKE UP”

Why Does It Happen?

Hypnic jerk is nothing to worry about in most cases

It occurs when muscles begin to relax in preparation for sleep. The brain becomes confused by this, thinks the body is falling and tenses the muscles to brace for impact..

However, for some people, a hypnic jerk can actually be a real symptom of a serious health condition. 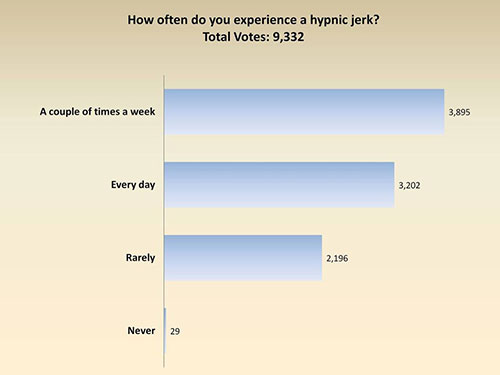 Over 10% of the population suffers from restless leg syndrome, which causes individuals to experience throbbing, painful sensations in their legs.

Although it could be hereditary, it has been linked to the following:

Researchers have shown that hypnic jerks are far more common among those with brain lesions.

Brain lesions are areas of brain tissue has been damaged by disease or physical trauma.

A brain lesion can in some instances cause headaches, neck pain, nausea, memory loss and seizures.

An individual?s risk of experiencing a hypnic jerk increases or decreases along with their stress and anxiety levels.

A lot of sleeping disorders like narcolepsy, can result in abnormal brain activity. This activity can include neurotransmitter changes and can increase the hypnic jerk response.

If they are caused by sleeping disorders, hypnic jerks canm often accompanied by paralysis and hallucination.

Watch this short video for more info on the hypnic jerk phenomenon: