?Eighty-five percent of all samples tested positive for glyphosate and 62 percent for AMPA, which is the environmental metabolite, but in the case of cotton and sterile cotton gauze the figure was 100 percent,? Dr. Damian Marino, the study?s head researcher.

A popular herbicide called Glyphosphate has been linked to causing cancer by the World’s Health Organization’s cancer research arm. It was detected that 85% of all cotton hygiene products tested in a preliminary study from researchers at The University of La Plata in Argentina.

62% of products tested possitive for AMPA as well which stands for ‘aminomethylphosphonic acid.’ This is a deritive of Glyphosphate.

The results were presented to The Third National Congress of Doctors of Fumigated Towns in Buenos Aires.

?In terms of concentrations, what we saw is that in raw cotton AMPA dominates (39 parts per billion, or PPB, and 13 PPB of glyphosate), while the gauze is absent of AMPA, but contained glyphosate at 17 PPB,? said Dr. Marino.

?Very serious when you use cotton or gauze to heal wounds or for personal hygiene uses, thinking they are sterilized products, and the results show that they are contaminated with a probably carcinogenic substance.”

?Most of the cotton production in the country is GM (genetically modified)?cotton that is resistant to glyphosate. It is sprayed when the bud is open and the glyphosate is condensed and goes straight into the product.?

Unsurprisingly, Glyphosphate is one of the main ingredients of RoundUp, a popular weed killer. Which is made by no other than bio tech giant Monsanto. Which farmers sprayed 2.6 billion pounds over U.S Agricultural land between 1992 and 2012, according to the U.S Geological Survey.

The graph below from the U.S. Department of Agriculture indicates an upward trend on the country?s adoption of genetically modified soybean, corn and cotton. 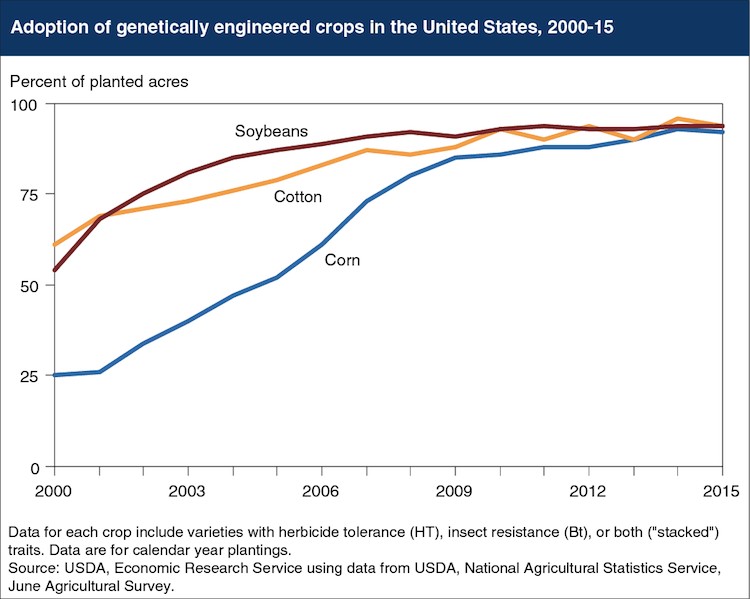 Unfortunately, this is not a recent disturbance. The Chemical Make-Up of products and feminine care products specifically have been ignored for too long and it’s is time to recognize this problem.?A 2013 report by Women?s Voices for the Earth detailed how the feminine care industry sells products containing unregulated and potentially harmful chemicals, including preservatives, pesticides, fragrances and dyes.