We rarely think about our poop, much less study it. But it turns out there?s a whole lot we can learn from our dung.

First, a bit of poo-101: Bowel movements are the end result of eliminating what?s left after your body takes the nutrients it needs from the food you eat. Water makes up about 75 percent of it, while the rest is a gross combo of dead and live bacteria, fiber, other cells, and mucus. Most foods are broken down during digestion and form a gel-like substance that becomes part of your poop, but some foods?corn, oat bran and carrots, to name a few?are made of insoluble fiber and are more difficult to digest, which is why they emerge relatively intact.

Since it was literally a part of whomever it belonged to, poop can tell us a lot about a person, a little like a stinky fingerprint. The three professionals most likely to be examining your stool would be doctors, forensic scientists and coroners: Here?s what each might glean from your latest movement.

Around 2000 years ago, Hippocrates?the father of medicine?claimed that, ?All disease begins in the gut.? That?s because more than 70% of our immune system is located in and around the gastrointestinal tract, and why your poop is often the first place a doctor will investigate to figure out what?s ailing you. Specifically, he?ll be interested in four things: Color, shape, buoyancy and smell. Let?s tackle them one at a time.

Brown: Poop is generally brown in color. This is due to red blood cells in your liver and bone marrow breaking down and forming a pigment called bilirubin, which eventually turns it the shade we?re all familiar with. Any drastic deviation from this color can be a sign that something?s wrong, for example:

Green: It?s not uncommon to have green poop, as that?s the natural color of bilirubin before it passes through the large intestine. When the poop goes through the intestines too fast, it has no time to turn brown, so it comes out green. Poop can also be green due to eating a lot of green leafy vegetables, or even taking iron supplements.

Very light-colored stool: This could indicate a block in the flow of bile, or possibly liver disease.

Black: This could indicate internal bleeding, possibly resulting from an ulcer or cancer. Black stool due to bleeding is also ?sticky? (tarry) and smells bad. Black stools are common, though, when taking certain vitamins or medications.

Red: This usually indicates a bleeding ulcer in the lower intestinal tract (or hemorrhoids).

According to Dr. Oz, the perfect stool is log-like and not broken up into pieces. Pencil-thin poops, explains gastroenterologist Anish Sheth, MD, can be a sign of rectal cancer, which narrows the opening through which stool passes. If you?re really curious about the shape of your poo, the Bristol Stool Scale is the go to for poop analysis, and was created to limit needlessly awkward conversations between patient and doctor. The scale provides an easy shorthand for people to monitor their movements. Stools at the lower end of the chart (types one to three) are indicative of various forms of constipation; those in the middle (four and five) are ideal, healthy plops; and anything higher than that leans towards diarrhea, with multiple possible causes. 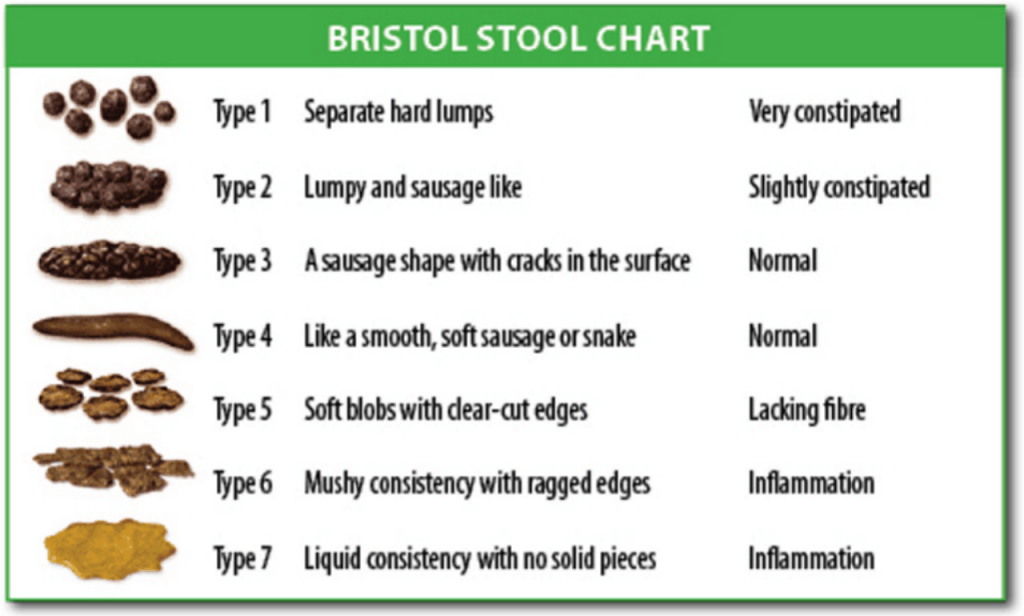 Floating poop is a sign of bad digestion, indicating you have excess air inside your intestines. It typically happens when you eat something you?re not supposed to, e.g., milk products for the lactose intolerant.

Foul-smelling stools often occur due to the various foods eaten and the bacteria present in the colon, but they can also indicate more serious health problems, including ulcerative colitis, Chrohn?s disease, celiac disease (gluten intolerance), chronic pancreatitis and cystic fibrosis.

Sometimes, even dead poop has a (cautionary) story to tell. While it has been long believed that Elvis Presley died in 1977 from an irregular heartbeat (brought on by drug dependency, obesity and a weak heart), his longtime friend and physician, Dr. George ?Nick? Nichopoulos, believes it was in fact chronic constipation that actually killed the King of Rock n? Roll, evidenced by his highness?s dead poop?four or five months worth of it?due to poor motility of the bowel. An autopsy revealed Presley?s colon was five to six inches in diameter (the normal width is two to three inches) and nearly nine feet long (as opposed to the standard four-to-five.)

As Dr. Daniel Brookoff explains in the video ?Demystifying the Death of Elvis,??Presley?suffered from chronic ?overflow diarrhea? (a sort of persistent leaking of stool) and actually soiled himself on stage in Baltimore, which terrified him. To manage this condition, he began taking high dosages of a narcotic called Lomotil.? ?The irony is that Elvis?s constipation was caused by the very drug he was taking to relieve the pain caused by said constipation. One night, after playing gospel music late into the evening with friends, Presley tried mightily to have a bowel movement, but as he bore down hard to push things out, the straining is believed to have caused a fatal arrhythmia (an irregular heartbeat). The King?s?death on the throne might have been avoided if his intestinal health had been better understood and maintained.

Believe it or not, it?s entirely possible to extract DNA from feces, although it?s rarely done as it?s an unreliable method of testing. That?s because poop doesn?t contain any pure forms of DNA besides the handful of white blood cells it collected as it passed through the colon. In other words, it?s unlikely those skid-marked undies are going to help the CSI team nab the killer. That said, some have turned to DNA testing for other, less pressing criminal matters: Namely, to positively identify dogs who illegally defecated on lawns.

The average man will produce 360 pounds of poop a year?nearly a pound a day?and over 14 tons in a lifetime. It?s good to know that some of it?s telling a story worth listening to on the way out.

How often should you poop, anyway?

Depending on your diet, age, and daily activity, regularity can mean anything from three bowel movements a day to three each week.?

However, ?there?s more to proper bowel function than just being regular. For example, you should be able to: